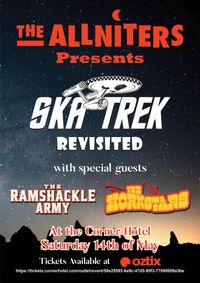 The Hornstars supporting The Allniters and The Ramshackle Army

The Hornstars are very excited to be opening for the legendary Allniters and The Ramshackle Army. Get your tickets, wear your dancing shoes and get down to the Corner Hotel on 14 May! 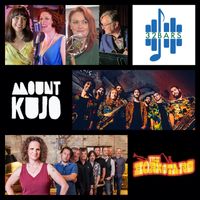 The Hornstars with Mount Kujo

The Hornstars Live on Mars

The Wrong Road with The Hornstars & The Woodland Hunters

There are many words that could be used to describe Melbourne band The Hornstars. Funky. Danceable. Loud. Quirky (have you seen that video?). But above all else, the Hornstars are all about fun, and their primary mission is to show their audience a funky good time.

The Hornstars sound is big, brassy and hard to pigeonhole. The lineup featuring Clancy Cullen (vocals), Daniel Bardan (trumpet), Bruce Cousins (trombone), Russell B Myers (tenor sax), Joey Mount (drums), Mike Holloway (bass), Rob D’Alessandro (keys), Mark Morand (guitar) and Eric Morand (alto sax and percussion) bring a wide range of influences to the mix. Jazz, soul reggae - it may not all be funk as we know it, but it is definitely funky.

The Hornstars formed in 2016, legend has it, after founding members were kicked out of their ska band for allegedly being “too funky”. What came next was inevitable. The band quickly recruited their 9-piece lineup and confected a set of catchy and danceable songs, which they took to the pubs and bars of Melbourne and beyond.

The Hornstars debut album, featuring these initial tunes, was launched in March 2020, immediately before their beloved city of Melbourne was plunged into lockdown, as the pandemic took hold.

During the COVID-enforced hiatus, band members continued to write, getting together when restrictions allowed. The band’s song writing continued to evolve, sometimes reflecting what was going on in the world outside (witness the hard funk grooves of "No Gigs" and "Half Way There"), and at others expressing aspirations for brighter post-pandemic future ("Touch", "Say Goodbye"). Occasionally emerging between lockdowns in 2021, the Hornstars were greeted with an enthusiastic reception and sold out shows.

With a fresh batch of tunes just recorded, the Hornstars are looking forward to playing live in 2022, starting with their gig at Melbourne's iconic Night Cat on 5 March. And while we are still living in uncertain times, here is one thing to be sure of - The Hornstars are still having fun in 2022, and so should you.